Apple’s recent release of XCode 5.1 resulted in a familiar but unexpected error for me:

Illegal Configuration - Static table views are only valid when embedded in UITableViewController instances.

My project had a “Settings” screen with two static TableViews, along with some other elements which made it undesirable for me to use a UITableViewController. I had received the error before but had been able to work around it thanks to [this StackOverflow post] (http://stackoverflow.com/questions/19110668/static-table-view-inside-uiviewcontroller-xcode-5). Unfortunately, XCode now detects that workaround which forced me to come up with a new one.

Quick note: I think the way Apple would prefer that developers do this is to create a ContainerView which embeds a TableViewController. Personally, I think this solution is kludgy and adds unnecessary complexity to your Storyboard and your ViewControllers.

Another quick note: The following has been tested with portrait mode only. Some tweaking may be required to support orientation changes since Auto-Layout constraints are required for this workaround.

As I’ve done in previous blog posts, I’ll walk through an example project. You may want to skip the “Initial Setup” step and try to apply it to your existing project if you just want to understand how it works.

Here’s the end result of the example app: 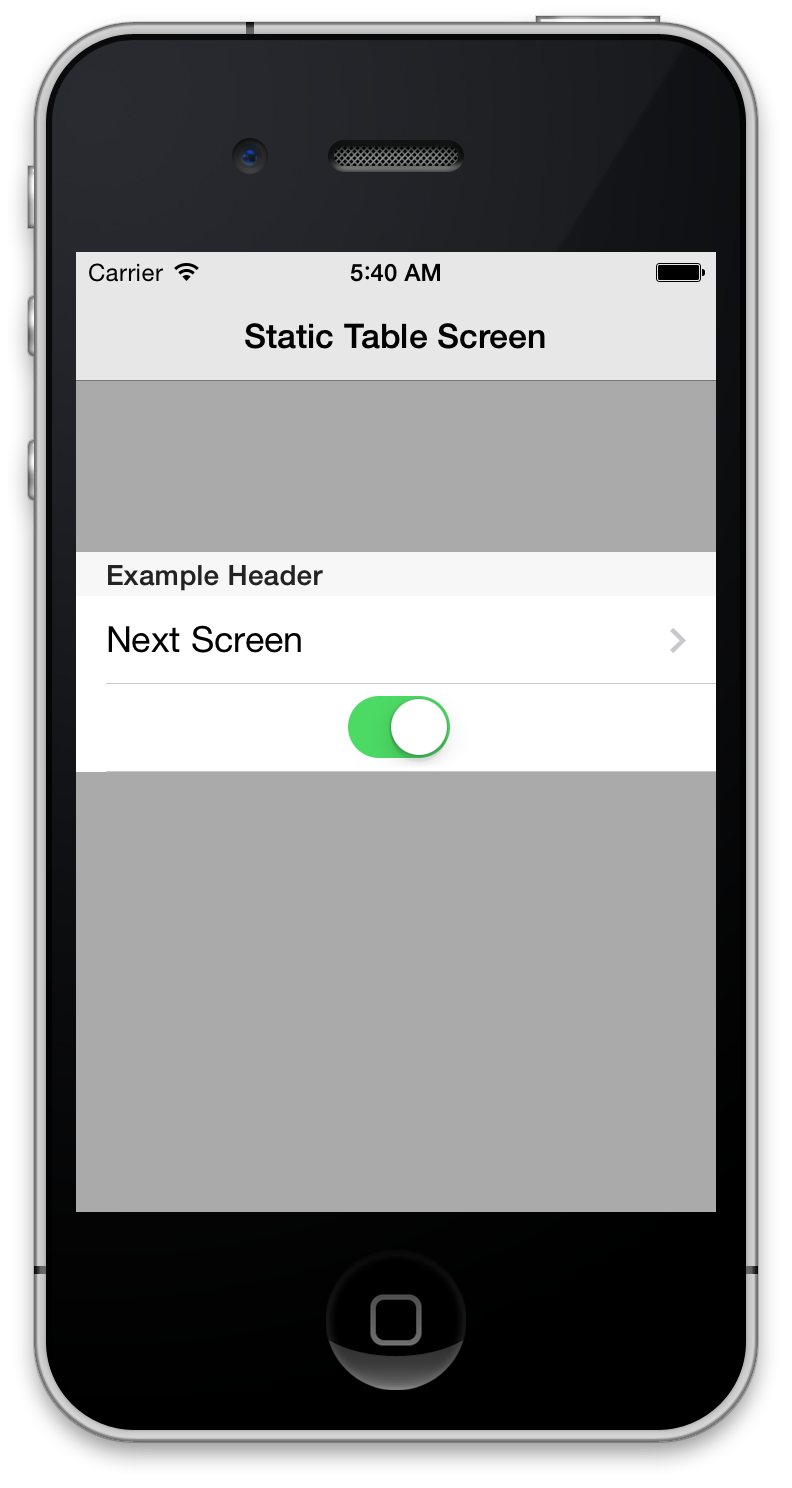 There are six parts:

At this point, your storyboard should look something like this: 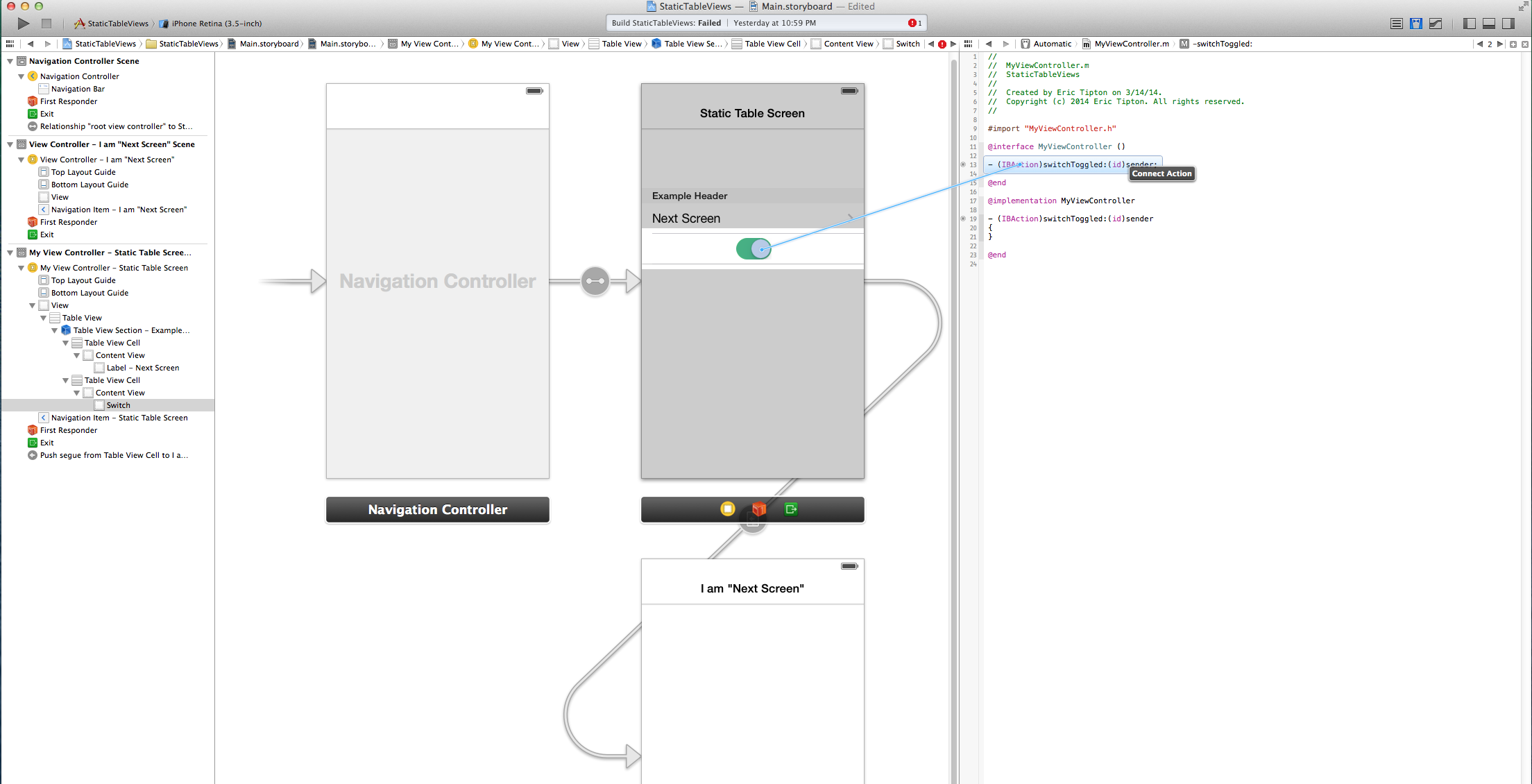 Move Cells out of Table

So, now we know what we want our screen to look like and how we want it to behave. But how do we work around the build error? Let’s start by doing as it says, and stop using static tables… 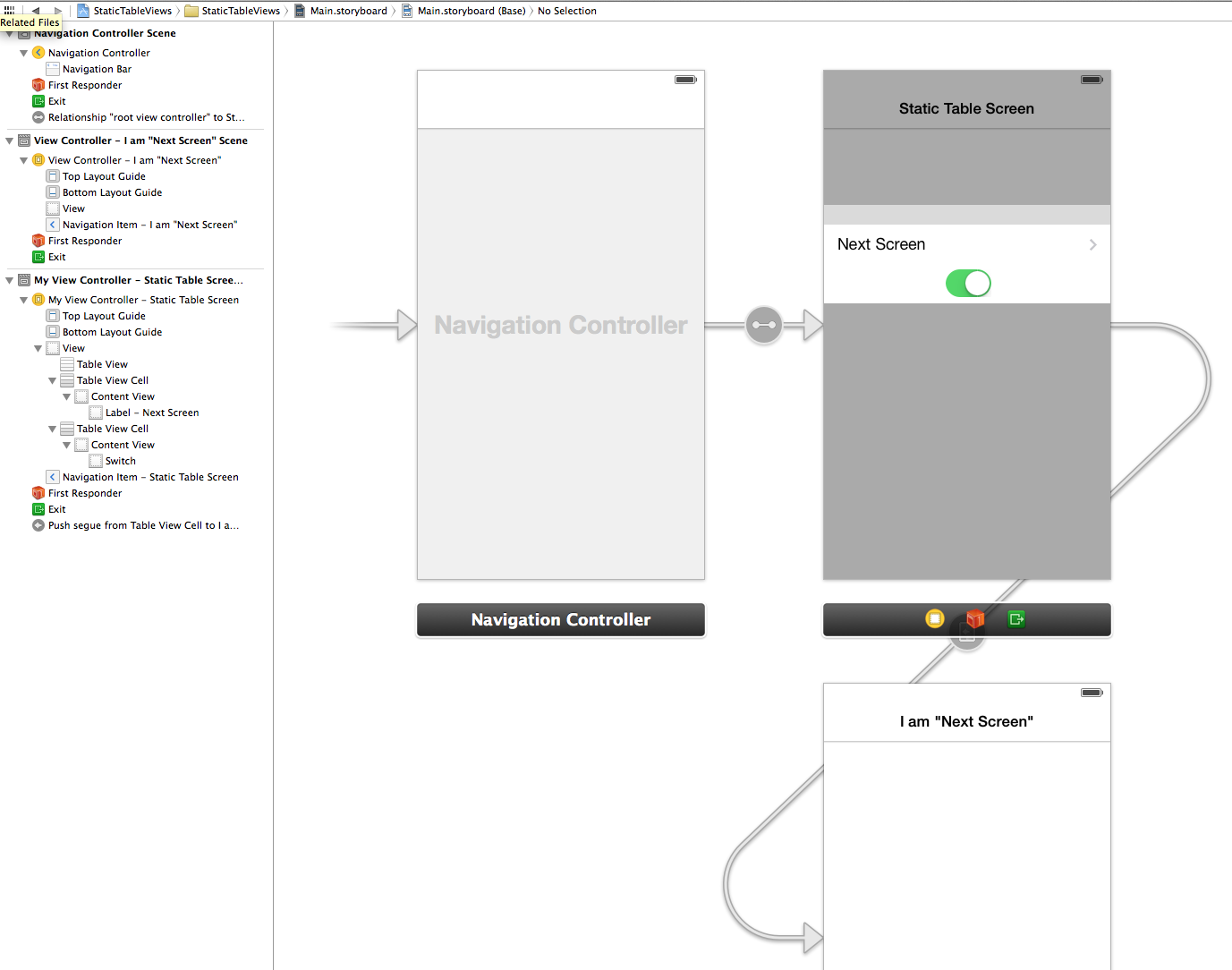 The build error should be gone, but of course if you run the app now, the TableView won’t actually populate and the cells won’t behave as expected.

The problem is that the TableView has no dataSource and therefore doesn’t know what to display. So let’s give it what it needs!

If you run your app now, you end up with the following: 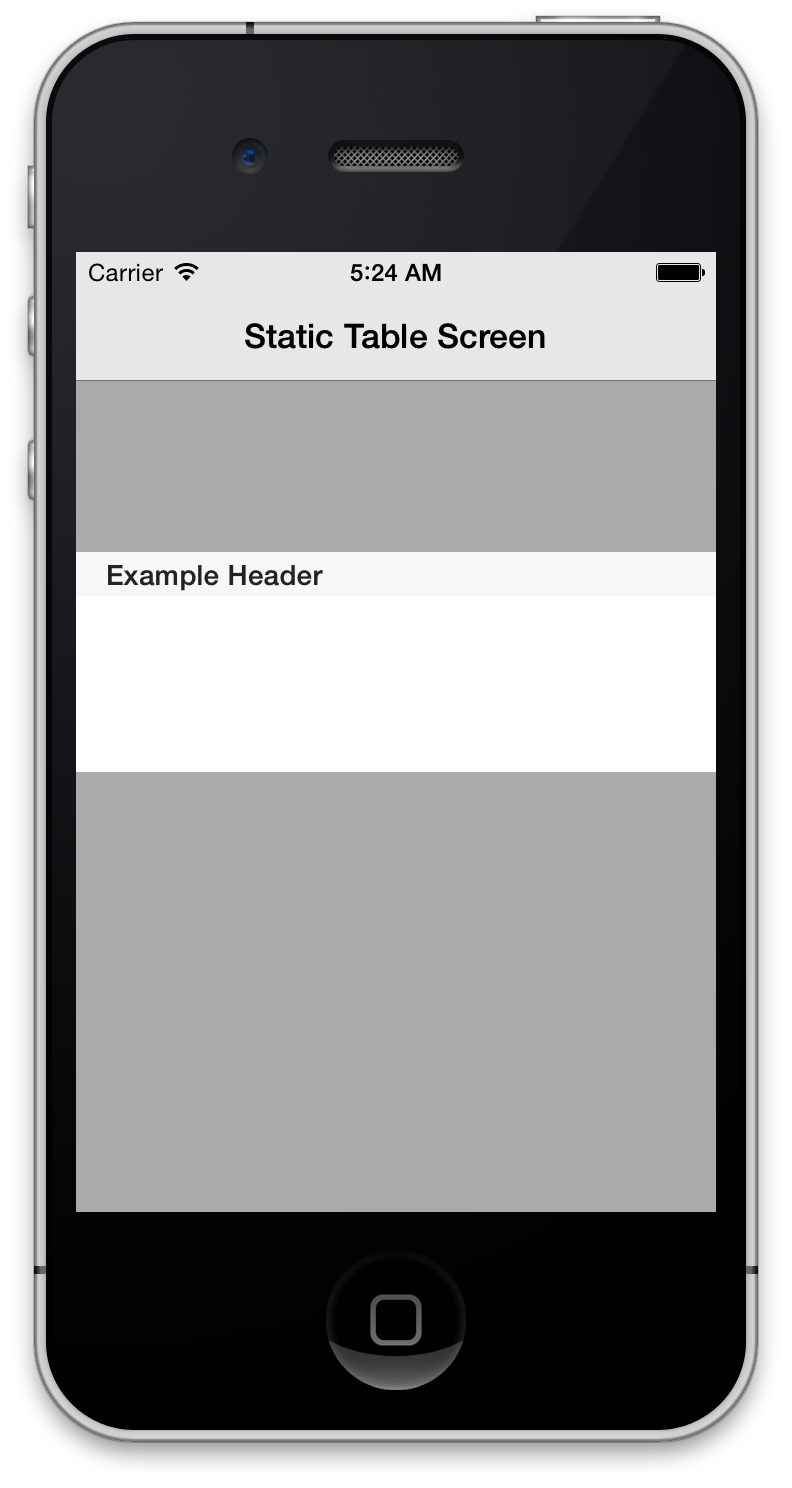 The problem is that, initially, the UITableViewCells are subviews of the ViewController’s view. The solution is to call “removeFromSuperview” to free them up to be used properly by the TableView:

Hmm, seems like we’re getting closer, but obviously there’s still an issue.

As it turns out, when views are moved, their auto-layout constraints play a major factor. So what we need to do is set layout constraints on the UITableViewCells in our Storyboard (keep reading before you start doing this though). The x and y positioning are only important to keep the compiler happy, since the width and height constraints are the ones that take effect once the cells are moved to the TableView.

However, to truly keep the compiler happy and free of warnings, there is one little “gotcha.” For some reason, if a TableViewCell’s y constraint isn’t 0, XCode will give a warning. To work around this:

OK, that’s all the storyboard changes needed – here’s what the Document Outline should look like: 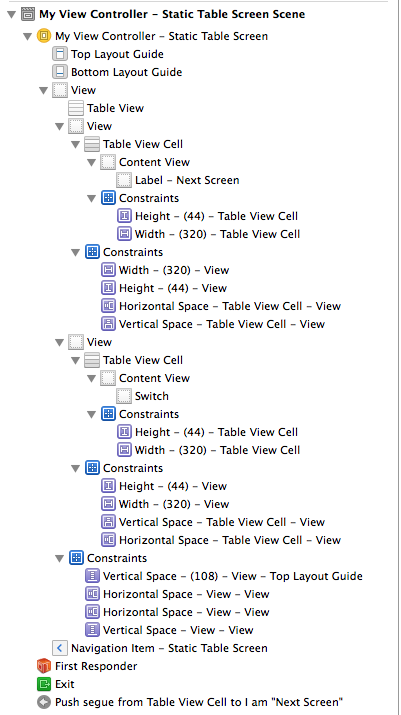 Run your app now now and it should behave as expected, for the most part. Verify that the segue is intact by clicking the top cell. We’re almost done, just a couple more small changes…

There are two additional code changes you can make, one to show that the switch’s IBAction is still intact, and one to “deselect” cells that had previously been selected (UITableViewControllers add this functionality by default).

Phew! We’re done. Yes, it seems like a lot of work but I just really disliked the idea of using a ContainerView for this type of thing. I spent way too much time working on this, but hopefully others find it useful!

One last note: For those who really want to get crazy, you can use IBOutletCollections to clean up your code a bit. See one of the answers on the aforementioned [StackOverflow post] (http://stackoverflow.com/questions/19110668/static-table-view-inside-uiviewcontroller-xcode-5) for more details.